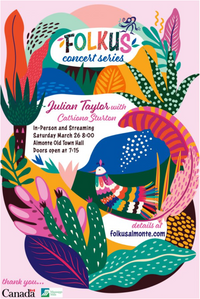 Julian Taylor is a songwriter at the top of his game, garnering a recent CFMA Solo Artist of the year, and was a Polaris Prize nominee for 2021. The Ridge, his latest recording, is a tender and heartfelt exploration of childhood and family, and finds the artist at his most reflective. Taylor is an artist who defies genre, but this latest recording takes us back to his roots, evoking his childhood soundtrack of Lightfoot, The Band, and his grandfather’s classic country records, while being true to his own path as leader of multiple bands. Of West Indian and Mohawk descent, Taylor first made his name as frontman of Staggered Crossing in the early 2000s. These days, however, the soulful singer/guitarist might be on stage one night playing with his eponymous band, spilling out electrified rhythm and blues glory, and the next he is at a folk festival delivering a captivating solo singer-songwriter set. In everything he does, Taylor has carved his own path, creating genre-free music with a generosity of spirit and a strong belief in the healing powers of song. We are lucky to have him for such an intimate performance.